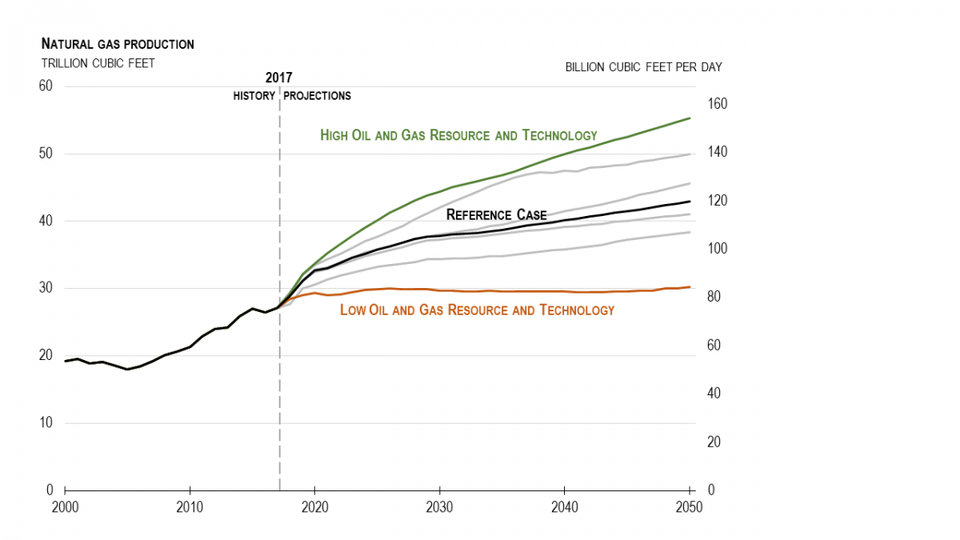 This rising surge of natural gas production in the U.S. is a good thing for our economy, our energy independence, and the national security of our European allies looking to rely less on Russian production.

There were no LNG export terminals in the U.S. prior to 2016. In fact, America’s first LNG export terminal, Cheniere Energy’s Sabine Pass facility in Louisiana, was originally built as an LNG import terminal in 2008 when experts thought the U.S. was facing a severe national gas shortage. Fracking changed all that, with the price of natural gas at the Henry Hub declining 70 percent in inflation adjusted terms from 2008 to 2017.

Less than 10 years after fearing America would need dozens of LNG import terminals to meet its energy needs, America instead became a net natural gas exporter in 2017, with exports quadrupling from 0.5 billion cubic feet of gas per day in 2016 to 1.94 billion cubic feet per day. Of U.S. LNG exports last year, 53 percent went to Mexico, South Korea and China, with the largest share, 20 percent, being received by Mexico.

A growing share of American LNG exports are expected to go to Europe as EU member states look to diversify from their growing dependence on Russian gas. NATO members Poland and Lithuania in particular have built LNG import terminals to offset their reliance on Russian fuel amidst ongoing unease over Russia’s return to territorially expansionist policies.

By making Europe less vulnerable to Russian energy extortion, European policymakers can more confidently confront Russian attempts to destabilize nations on their periphery that used to be part of the old Soviet Union, such as the Baltic States, or bound to the Soviet Union during the Cold War as Warsaw Pact nations, such as Poland.

In 2018, natural gas is expected to generate 34 percent of U.S. electricity, up from 30 percent in 2012. Coal is projected to provide 29 percent of domestic electricity production this year, down from 37 percent six years earlier. Renewables will kick in 17 percent of U.S. power production, with the plurality of that power coming from hydroelectric dams.

However, ongoing coal generating station retirements will likely boost natural gas’ importance in reliably powering the grid when wind and solar aren’t generating. And, since fuel costs constitute about 40 percent of the cost of generating electricity with natural gas, any price increase in natural gas will quickly be transferred to the consumer.

Further, as some states, such as California, continue to push coal off the grid while promoting wind and solar power, keeping natural gas prices stable becomes crucial in keeping electric prices affordable. It is instructive to note that as natural gas prices dipped 70 percent in real terms from 2008 to 2017, California’s inflation adjusted electricity prices rose by 13 percent as the state invested heavily in wind, solar, and natural gas generating stations. Should natural gas prices rise significantly, California utilities and regulators will have little choice but to pass significant costs onto California residents and businesses.

In states that have maintained a robust coal generating capacity, however, consumers benefit from a more diverse fuel mix, with utilities using more coal when natural gas prices are high.

As a matter of national policy, investment in new, cleaner and more efficient coal generating stations should not be discouraged as domestic use of coal for electric power serves to keep electricity affordable while encouraging more LNG exports to our trading partners and allies, a win-win for our economy and national security.

This commentary was originally featured in Forbes on May 14, 2018.

The Honorable Chuck DeVore is Vice President of National Initiatives for the Texas Public Policy Foundation. He previously served three terms in the California State Assembly.

Should natural gas prices rise significantly, California utilities and regulators will have little choice but to pass significant costs onto California residents and businesses.