The True Cost of Renewable Energy

By shifting the burden from the electric bill to the tax bill, the true cost of renewable energy is hidden from taxpayers and consumers.

Recent claims of renewable energy sources being at “grid parity” with conventional energy sources are misleading to ratepayers across the United States. Renewable energy sources such as wind and solar appear cost-competitive compared to conventional energy sources such as gas, oil, and coal due to government subsidies distorting the market. The current prices being quoted for renewable energy projects do not reflect the true cost of that energy production, which is subsidized directly by federal, state, and local tax rebates and often by extra charges related to the transmission costs of those projects. There is also the cost of backing up wind and solar resources when they aren’t producing, which is an indirect subsidy that is almost impossible to quantify and therefore never reported. Therefore, the true and total cost of renewable energy only reaches “grid parity” by handicap.

The most transparent renewable energy subsidies are the federal Production Tax Credit (PTC) and the Investment Tax Credit (ITC). The PTC, which is primarily used by wind energy producers, allows renewable energy producers to reduce their tax burden as a function of how much energy they produce. The credit is currently $24 per MWh for 10 years, with 20%, 40%, and 60% reductions for facilities that begin construction in 2017, 2018, and 2019, respectively, and no credit for facilities that begin construction after 2019 [1]. The ITC, primarily used by solar producers not eligible for the PTC, provides a credit of 30% of the project’s capital costs, stepping down to 10% between 2020 and 2022 and remaining at 10% thereafter [2]. The Joint Committee on Taxation estimates these tax credits will add up to $11.8 billion in solar subsidies and $23.7 billion in wind subsidies [3] from 2017 to 2021, on top of the tens of billions already spent through these mechanisms.

The PTC is high enough that producers often get paid as much or more per unit of energy in subsidies than the average wholesale price of electricity in many U.S. markets, which usually ranges from $10-40 per MWh during non-peak times [4]. Given that wind is a free fuel source, wind energy producers can even produce when the wholesale price is negative, right up to the value of the subsidy. At these times, traditional energy sources either have to pay to put electricity on the grid or shut down their generators. This economic structure disincentivizes the construction of dispatchable power sources that can be used to supplement renewable energy production when the wind isn’t blowing or the sun isn’t shining. As renewable energy becomes a larger portion of the electricity supply in many places, extra costs will have to be incurred, either in the form of backup generation or energy storage, in order to ensure reliability and avoid more frequent blackouts. 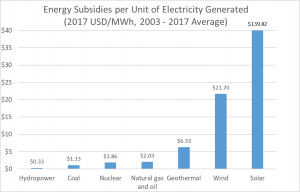 Many advocates of renewable energy assert it is only fair renewable energy subsidies be supported because “all fuels are subsidized.” However, wind and solar have received more federal subsidies per unit of electricity produced than any other resource. Using federal budget data and the Energy Information Administration’s (EIA) methodology for calculating federal energy subsides [5], the Life: Powered team estimates that solar, wind, natural gas and oil, and coal have each received about $30 billion in subsidies and support since 2003, with nuclear receiving about $22 billion. Dividing those numbers by the amount of electricity produced by each resource since 2003, solar received $139.82/MWh and wind $21.70/MWh, compared to $2.03/MWh for natural gas and oil, $1.86/MWh for nuclear, and $1.13/MWh for coal. In other words, solar generators have received more from subsides than from selling electricity over the past 15 years, and wind has received at least a significant fraction of their total revenue from subsides. And the data makes it clear that those industries are still much more dependent on subsidies than other industries.

There are also numerous subsidies in effect at the state and local levels. For example, Texas spent nearly $7 billion to fund extra transmission lines, dubbed “Competitive Renewable Energy Zones” or CREZ, to bring wind and solar power from producing sites in West Texas to major cities in Central and East Texas. The CREZ project is somewhat unique in its transparency because it was directly authorized by the Texas legislature and paid for by extra charges in the transmission portion of every Texan’s electric bills. In regulated state utility markets, the cost of renewable energy projects, and the transmission and backup power to support them, are often built into the “ratebase” or retail cost of electricity and never really seen by consumers. States with renewable portfolio standards – 29 states have some kind of minimum generation requirement [14] – have to socialize the costs of building that renewable generation, usually through a credit system. And there are many other means of support given to renewable energy companies, including property tax relief and grants for job training. Thus, the true and total cost of our energy sources are hidden beneath a complicated structure of taxes and fees, and the lack of price transparency makes it difficult to establish true competition in electricity markets between renewable and fossil fuel energy sources.