Imports and Exports of Fossil Fuels

Recent increases in domestic energy production have led to predictions that the U.S. will soon become a net energy exporter

A common refrain spoken against America’s reliance on fossil fuels is that we are dependent on other countries, many of whom do not share our democratic values, driving up our trade deficit and weakening our economic and geopolitical security. While this refrain may have held some truth in the mid-2000s, when petroleum accounted for almost half of our trade deficit in goods [1], recent increases in domestic energy production – driven by American ingenuity, market forces, and pro-energy policies – are flipping the script. The U.S. trade deficit in petroleum goods has declined by over $350 billion, or 71%, since 2005 and in 2018 accounted for only 14% of our total trade deficit in goods [1].

As total U.S. energy consumption has remained flat since the 1990s due to improving efficiency [2], the story of rising U.S. energy production is also a story of falling imports and rising exports. The Energy Information Administration (EIA) predicts that U.S. will become a net energy exporter by 2022 [2]. In 2017, natural gas exports outpaced imports for the first time since that data began being tracked in 1973 [3]. Net imports of crude oil and petroleum products have fallen 80% since 2006 [4], and EIA forecasts show domestic oil and natural gas liquids production increasing another 30-40% over the next 10 years [2]. The U.S. has long been a net exporter of coal and coke and will continue to be for the foreseeable future [2]. 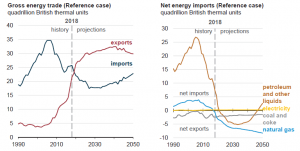 Despite the green, made-in-the-USA image of renewable energy generation, the fact is that solar panels, wind turbines, and Li-ion batteries on rely mostly on imported materials from countries with far less stringent environmental and labor standards than the U.S. More than 90% of solar photovoltaic modules were imported in 2017, about 2/3 from East Asia, [5] and while imports and local manufacturing of wind energy components are more balanced [6], most of the steel and other raw materials are also imported. Li-ion batteries rely primarily on lithium and rare earth metals from China and other developing countries. Importing energy materials and fuels is not necessarily a bad thing and can result in lower cost, more reliable, and more diverse energy sources, but renewable energy producers are disingenuous to claim that switching to wind and solar will by default reduce our energy imports and create a completely virtuous energy ecosystem.

Coming back to fossil fuels, it is becoming clear that the shifting dynamics of the energy trade caused America’s growing energy production are a huge boon to America and her closest trading partners. Following the repeal of the archaic crude oil export ban, crude oil exports have dramatically increased, with most going to Canada and Mexico, long the largest recipients of our exports of refined products [7]. In 1977, OPEC countries accounted for 70% of U.S. petroleum imports, but that number fell to 33% in 2017, less than what was imported from Canada [8]. Exports of natural gas to Europe and the Far East rising, lowering energy costs in those countries and reducing their dependence on Russia [9]. The pace of development in the U.S., spurred by innovation and investment within competitive energy markets, and the expansion of trading markets stands to make the U.S. the world’s next energy superpower.

Finally, the ability of the U.S. to contribute to the global energy supply is critical to the security and prosperity of our allies. The U.S. and Canada are the only democratic nations among the major producers of oil and natural gas [10], and the free world is counting on us to be a leading energy producer and slow the flow of money and power to autocratic nations. The five largest economies in the world – the U.S., China, Europe, Japan, and India – are all dependent on energy imports, and all are increasing their imports except for the U.S.

In almost every country outside of the U.S. and Canada, the state owns the energy resources and operates a national energy company, but countries such as Mexico are beginning to follow the U.S. by opening up exploration to private companies and privatizing electricity markets. With America leading the world in energy production and trade, the benefits of energy entrepreneurship, private ownership of resources, and competitive energy markets will also spread and help break down the control of energy and prosperity by despotic regimes.