Fracking and the Environment

Most concerns about fracking, short for hydraulic fracturing, arise from misunderstandings of the technology and inaccurate characterizations in the media that portray fracking as being less safe than conventional oil and gas drilling techniques. Every aspect of the fracking water cycle (see illustration below) is well-regulated by current laws, and additional regulations covering fracking would add significant costs with no additional environmental benefits.

The primary misunderstanding about fracking, which is so often brought up in public debates, involves the possibility of fracking fluids migrating from an oil or gas well into the groundwater supply. Studies show this migration is a negligible concern unless the well is drilled at shallow depths near a drinking water supply or private water wells [1], which should not be allowed in the first place. Most oil and gas reservoirs are located thousands of feet below aquifers, with many layers of impermeable rock separating the reservoirs, and there is no evidence that fracking introduces an additional risk of hydrocarbons migrating up into drinking water supplies. 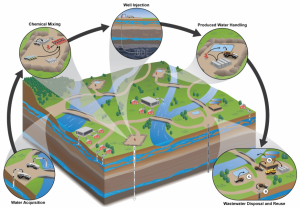 More sensible environmental concerns should be centered on (a) the amount and source of fresh water consumed by fracking operations and (b) the transport and storage of fracking fluids above ground. The vast majority of the small number of reported safety incidents involve above-ground spills during transport and handling or leakage through poorly sealed storage ponds. The few incidents that have occurred during the well injection phase are due to poor sealing of the well, and this activity is already highly regulated for this obvious reason. Again, decades of experience shows that diligent enforcement of current laws regarding oil and gas development can adequately protect our water supplies.

Another concern frequently raised is that a large amount of horizontal drilling and fracking in a given region can lead to earthquakes and seismic disturbances. Numerous studies have shown that the recent increase in the number of small induced earthquakes in the U.S. was not caused by drilling and fracking but by the injection of drilling waste into disposal wells [4]. And again, these issues can be appropriately handled through state-level regulations. In response to a series of small earthquakes near Fort Worth, the Texas Railroad Commission in 2014 required companies to submit additional information – including historic records of earthquakes in a region– when applying to drill a disposal well and clarified that it could slow or halt injections of fracking waste into a problematic well [5]. Other states have promulgated similar regulations to address problems as they arise, without need of intervention from the federal government.

Although millions of wells have been fracked in the U.S. over the course of several decades, study after study has concluded that fracking can be done safely and is not currently a systemic source of drinking water contamination. As a 2016 EPA report notes [1], human error, such as spills or poor sealing of wells, can lead to contamination, but such cases are rare and already subject to penalties under current regulations. A 2017 U.S Geological Survey study in areas with a large amount of oil and gas production supported this conclusion, saying that “… unconventional oil and gas production in some areas of Arkansas, Louisiana, and Texas is not currently a significant source of methane or benzene to drinking water wells [3].” Continuous research and monitoring of fracking and other novel oil and gas production techniques is certainly called for, but in light of the millions of safely fracked wells over many years, the current public fears and calls for more regulations or outright bans on fracking are unfounded.