The relationship between improvements in our standard of living and our increasing use of fossil fuels over the past 200 years is undeniable.

Beginning with the widespread use of coal and the invention of the steam engine in the late-18th century, the first oil wells in the mid-19th century, and the development of electric utilities in the late-19th century, fossil fuels powered the Industrial Revolution that lifted humanity from its history of subsistence living and fostered a new age of human flourishing. Prior to 1750, growth in per capita GDP across the world was barely measurable, but countries that embraced the use of fossil fuels since that time have seen per capita GDP skyrocket [1]. Economic inequality persists, but famine, lack of heating or cooling at home, lack of transportation, and limited access to health care are problems of the past for all but a small fraction of the developed world. We should universally recognize and celebrate the fact that energy and products derived from fossil fuels have made these advances possible.

Focusing in on the United States, the overall standard of living has soared over the past 150 years, due in large part to more abundant and reliable energy. With the caveat that historical data on how people spend their income is difficult to compare with modern data, a survey of historical data by the U.S. Census Bureau found that the average American family spent more than 80% of its income on food, clothing, and shelter in the early 1870s. Today, after a roughly 3-fold increase in per capita energy usage [3] and a nearly 14-fold increase in real per capita GDP [1], Americans spend a third of their income on these basic necessities [4]. Because energy and products derived from fossil fuels, along with other technological innovations, have helped to lower the cost of these necessities, we can spend more on education, health care, leisure, and luxury items that improve our quality of living. 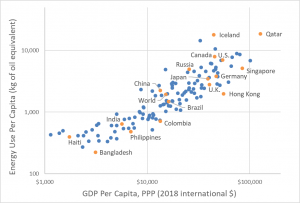 Energy use per capita vs. GDP per capita in 2014. Sources: International Energy Agency [5] and World Bank [6].

The benefits of energy derived from fossil fuels can be seen not just by comparing the historical evolution of developed economies, but also by looking at the relationship between energy use and economic prosperity in the world today. Economic growth is a result of many factors, and singling out access to energy as a root cause of economic growth is difficult, but the fact that energy use and economic prosperity are inextricably linked is undeniable. Similarly, the persistence of poverty in underdeveloped countries due to limited access to energy derived from fossil fuels is also clearly evident. Almost 1 billion people – 12% of the global population – remain without electricity, and 2.7 billion people – 38% of the global population – use solid biomass and animal dung for cooking [7]. In other words, nearly half the world’s population are lacking in lighting, electric or gas cooking and heating, air conditioning, refrigeration of medicine and food, and water treatment. Instead of exporting ideology about climate change, the U.S. should be exporting natural gas, low sulfur coal, and oil to a world that desperately needs access to more energy.

The modern environmental movement has largely swept the accomplishments of fossil fuels under the rug and painted fossil fuel energy production as immoral. However, if we define a morally sound activity as one that is fundamentally beneficial to human life, our discovery, production, and use of fossil fuels is undoubtedly morally sound, and any attempt to restrict our access to energy or raise the price of energy is immoral. Furthermore, by dramatically increasing the efficiency of agricultural production and by eliminating the deforestation required to heat and cook with wood, fossil fuels have reduced our footprint on the land and improved our environment. Rather than restrict our use of fossil fuels, we should be developing technologies that allow us to use more energy from fossil fuels with greater efficiency and less environmental impact.

[3] EIA (Energy Information Administration). 3 July 2013. “Energy sources have changed throughout the history of the United States.”