Given the challenges of renewable energy, converting the electricity and transportation sectors to 100% renewable energy will be an extremely difficult and expensive undertaking.

The three main factors to consider when addressing the ultimate feasibility of converting the electricity and transportation sectors to 100% renewable energy are diluteness, proximity, and reliability. Each of these problems presents massive hurdles to the broad adoption of wind and solar electricity generation, problems that should be addressed through the actions of individuals and corporations within the context of competitive energy markets. Government policies to force the replacement of fossil fuels with wind and solar are based primarily on an anti-fossil belief system that fails to recognize technological, societal, and economical constraints. These policies, such as renewable energy subsidies and mandates and extra taxes on fossil fuels, are economically devastating methods of pursuing an unrealistic goal of 100% reliance on renewable energy.

The energy density of given fuel source drives how much land is required to generate energy from that source. Fossil fuels are very concentrated forms of energy, created from the compression of dead plants and animals over millions of years, yet anyone who has been to the oil fields of West Texas or the coal mines of Appalachia knows that the amount of fossil fuels required to power modern economies is still tremendous. Considering that the power density of a fossil fuel power plant is 100 times greater than a solar farm and 1000 times greater than a wind farm (see the figure below), the land required to produce a comparable amount of energy from wind and solar would be staggering. To replace a single 1 GW power plant operating at 60% capacity would require about 555 3 MW wind turbines, which would take up a sprawling 116 square miles [1][2] because of the distance required between turbines. Accomplishing the same feat with solar panels would require about 27 square miles [2][3]. 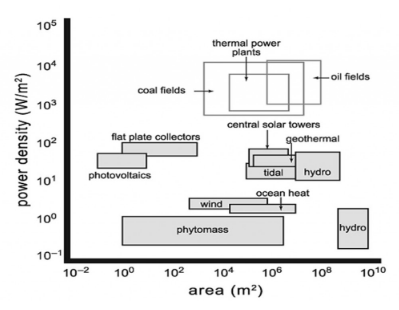 In addition to requiring a large amount of land, the areas suitable for wind and solar farms are usually not near the areas where the energy is consumed. This lack of proximity necessitates the building of costly and cumbersome transmission lines across vast distances to transport electricity from renewable sources to where it is needed. As an example, Texas has already spent nearly $7 billion to build thousands of miles of transmission lines that transport electricity from wind and solar farms in West Texas to cities in East Texas. In some cases, homeowners and other small electricity consumers with enough land can produce their own electricity with wind or solar and improve the proximity of their electricity sources, but large industrial and commercial consumers cannot do this. On the whole, a modern economy that relies on a large amount of electricity requires power plants that utilize land efficiently and are located where their electricity can be transported efficiently to where it is needed. Wind and solar generators do not meet this requirement.

The last issue with wind and solar is reliability, or to use a more accurate term, dispatchability. In order to avoid blackouts, the grid must match electricity supply and demand every minute of every day. Electricity demand changes dramatically both daily and seasonally, so having dispatchable generators that ramp up and down is critical to a reliable electricity supply. Wind and solar resources are not dispatchable because they depend on how much the sun shines and the wind blows. Therefore, in order to achieve a 100% renewable grid, wind and solar generators must be supplemented with energy storage, usually large batteries. While the price of large-scale battery technologies has come down in recent years to about $250/kWh, this task would still be extraordinarily cost prohibitive even with battery costs in the range of $100/kWh, a longstanding goal of the Department of Energy.

[2] Energy Information Administration (EIA). 29 November 2017. “Today in Energy: Wind Turbine Heights and Capacities Have Increased over the Past Decade.”