Contrary to the claim that our expanding use of fossil fuels is fundamentally damaging to the environment, fossil fuel based improvements in agricultural production have preserved Mother Nature by reducing humanity’s footprint on the land.

Fossil fuels are the great unsung hero of the agricultural revolution, allowing both the U.S. and the most of the world to produce food far more efficiently now than at the turn of the 20th century. Fossil fuel based innovations in fertilizers, herbicides, pesticides, and machinery has enabled food supply and production to not just keep up with population growth but actually far exceed it. The world population has more than quadrupled in the last hundred years, but fossil fuel based innovations have helped shrink the average hectares of cropland per person from 0.51 in 1900 to 0.22 in 2016 [1]. In fact, the total production of food energy from has increased by a factor of seven during the 20th century, far outpacing population growth [2]. Fossil fuels have banished the Malthusian trap to the annals of history in most developed countries and will do the same in the developing world as these innovations spread.

Ammonia-based fertilizers are one of the most critical components of this “green revolution.” The production of these fertilizers was made possible by the Haber-Bosch process, developed in the early 20th century to convert nitrogen and hydrogen to ammonia. This process would not be possible without natural gas, which serves as both a supply of hydrogen that initiates the process and a source of energy to catalyze it. The use of fertilizers has had a dramatic effect on agricultural yields, and a 2005 study of a wide range of crops found that the average yield attributable to fertilizer ranged from about 40 to 60% in the USA and England and was often higher in the tropics [3]. A 2006 study found that without pesticides, between 50 to 77 percent of all wheat, rice, corn, potatoes, and soybeans grown from 2001 to 2003 would have been lost, but the use of pesticides kept losses between 26 and 40 percent [4]. 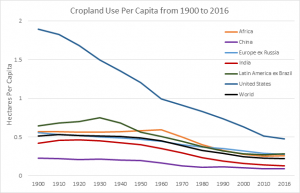 Developments in transportation and refrigeration have conquered the seasons and made fresh fruits and vegetables available during even the coldest winters and the hottest summers. All of these advances are made possible by energy from fossil fuels. We also have to consider the numerous synthetic materials developed from fossil fuels, including plastic, asphalt, synthetic fibers, and much more, which assist with transporting and storing food and food products. In most of the developed world, where these innovations have reached their fullest extent, an epicurean-minded individual can walk into a grocery store and purchase a feast that many of the wealthiest kings throughout history could not have envisioned, for the most part at a reasonable price. Fossil fuels have also insulated us from the fickleness of Mother Nature, removing the periodic famines that have plagued humanity for most of its history.

Another fossil fuel based innovation is the great variety of modern agricultural equipment. Everything from basic tractors to seeders, sprayers, sorters, threshers, and many more machines running on fossil fuels has increased the average yields of farmlands across the world and dramatically reduced the amount of labor required for agriculture. In 1870, about 48% of the U.S. workforce was employed in agriculture [5], and by 2016, only about 1.5% of the workforce was in agriculture [6]. Fossil fuels have freed us from backbreaking agricultural labor and allowed us to commit our time and energy to other pursuits that support human flourishing.

The claim of many people who advocate for limiting or abandoning fossil fuels – commonly known as the “keep it in the ground” movement – is that our expanding use of fossil fuels is fundamentally damaging to the environment. Our agricultural improvements over the past century, which have allowed us to feed a growing population while reducing our footprint, show that this claim is patently false. It is estimated that abandoning fossil fuel technologies would more than double the amount of cropland required to maintain current levels of output [7]. Fossil fuels have not only benefited humanity by improving access to affordable food, but by reducing our footprint on the land, they have also helped preserve nature.